Now in its fourth year, The Studio Prize by ARCHITECT Magazine, celebrates excellence in design education by recognizing thoughtful, ethical studio courses from accredited architecture schools around the world. The students enrolled in the winning courses receive a cash prize from a $25,000 purse furnished by the program’s exclusive sponsor, Sloan. Every year, a studio with a focus on sustainability, specifically water conservation, is singled out as the winner of the Sloan Award. In 2019, the Yamuna River Project studio titled “Re-Centering Delhi: A Piece of the City” was one of the six recipients of this award. This studio was co-taught by professors Pankaj Vir Gupta and Maria Gonzalez Aranguren.

For the past six years, the University of Virginia School of Architecture has run a one-semester advanced research studio focused on different urban planning and ecological challenges in New Delhi. The latest version of this studio looked at the land between two drains in the North of this megacity of 22 million people. These two drains empty into the Yamuna River at the Wazirabad Barrage, just as the river enters the city. These drains contribute 60% of the waste which contaminates and makes the river uninhabitable by wildlife as it runs through the city. The studio’s focus was to both analyze, negotiate, and plan a new piece of the city for residents of a vulnerable nearby settlement while critically proposing interventions which prevent or slow waste and contamination from flowing into the Yamuna River. The 14 students of the studio operated as an office, working in groups through an urban scale analysis which included a detailed investigation of the site, a research catalog of housing typologies in New Delhi, and a group focusing on different elements to be included in a masterplan. Together the students debated what urban, landscape, architectural, and infrastructural elements were to be included in the masterplan and where or how these elements of a city would co-exist and create a sustainable, well functioning, easily accessible piece of the city. Within this masterplan each of the students selected a project where the further detailed the design, functionality, experience and relationships with surroundings in the masterplan. Some of these projects included housing, markets, bathroom infrastructure, public spaces, productive landscapes, or transportation hubs from bridges to metro stations. See below a selection of images from the 2018 studio “Re-Centering Delhi: A Piece of the City.” 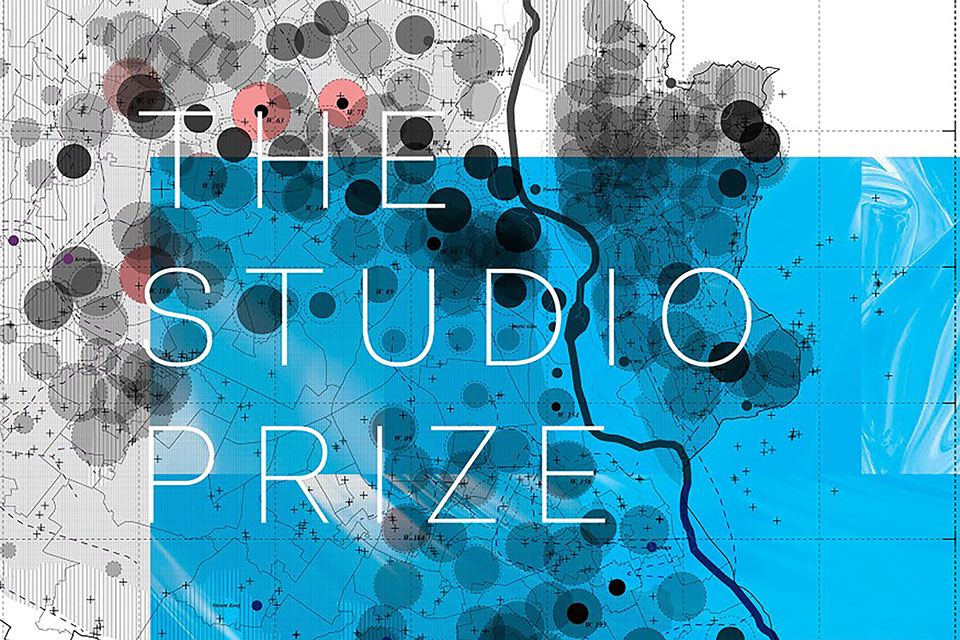 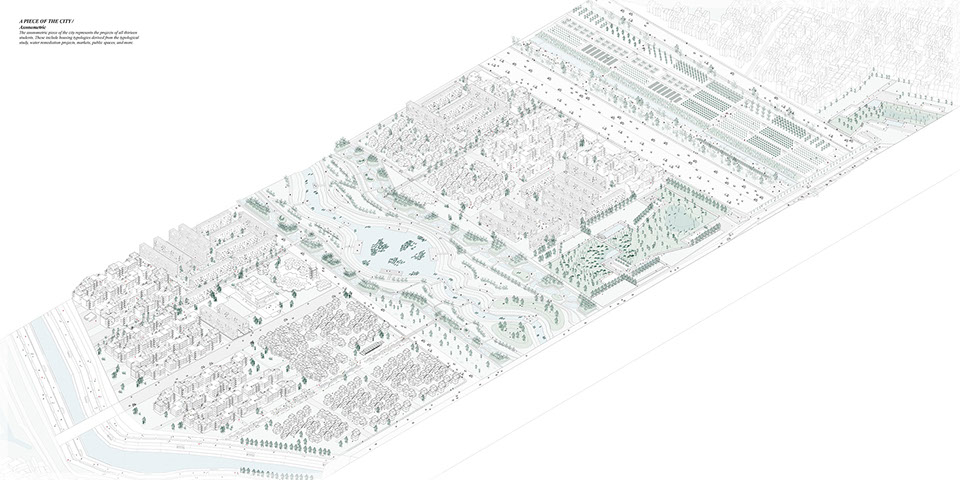 Each of the individual student proposals were combined into a single master plan, or piece of the city, that addresses larger regional infrastructure questions related to ecology, urbanism, infrastructure, and social welfare. This axonometric displays a section of the group masterplan. 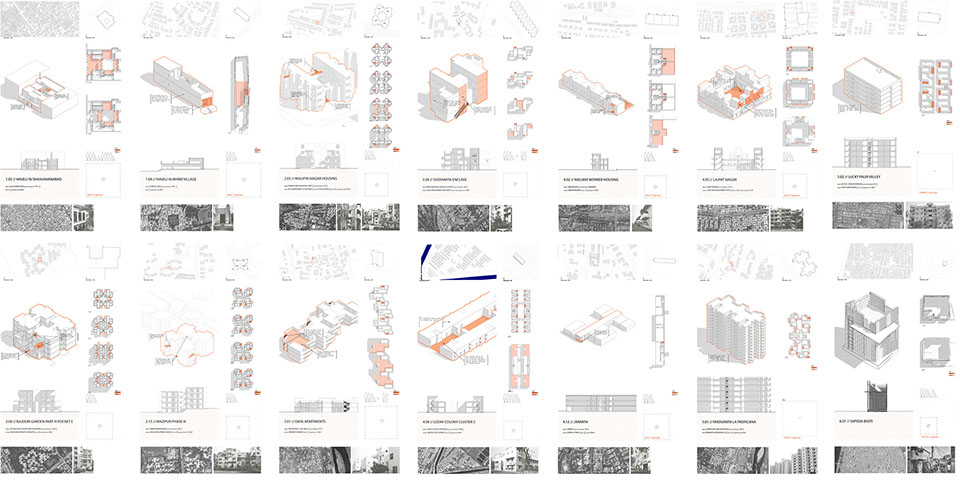 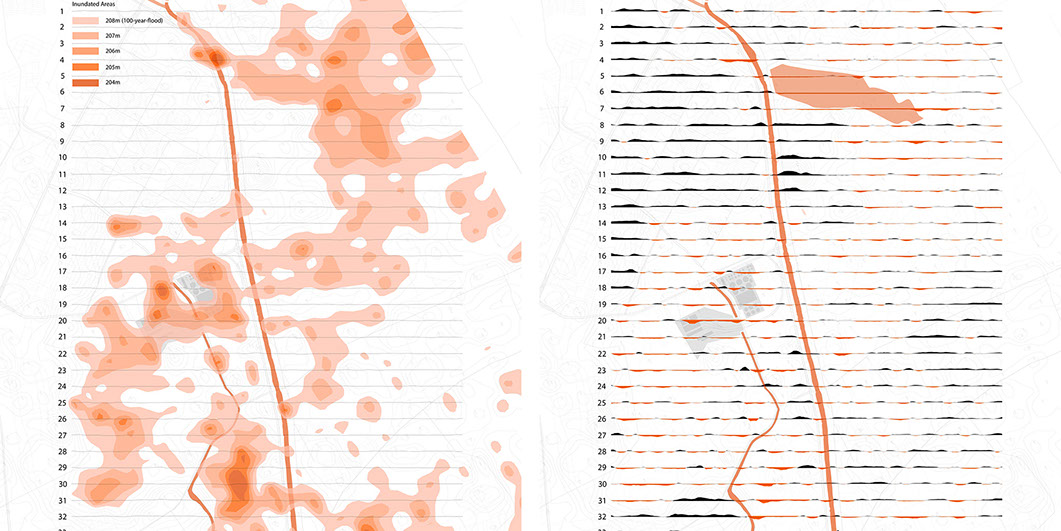 Sectional and Topographic / Flooding Analysis of the Studio Site 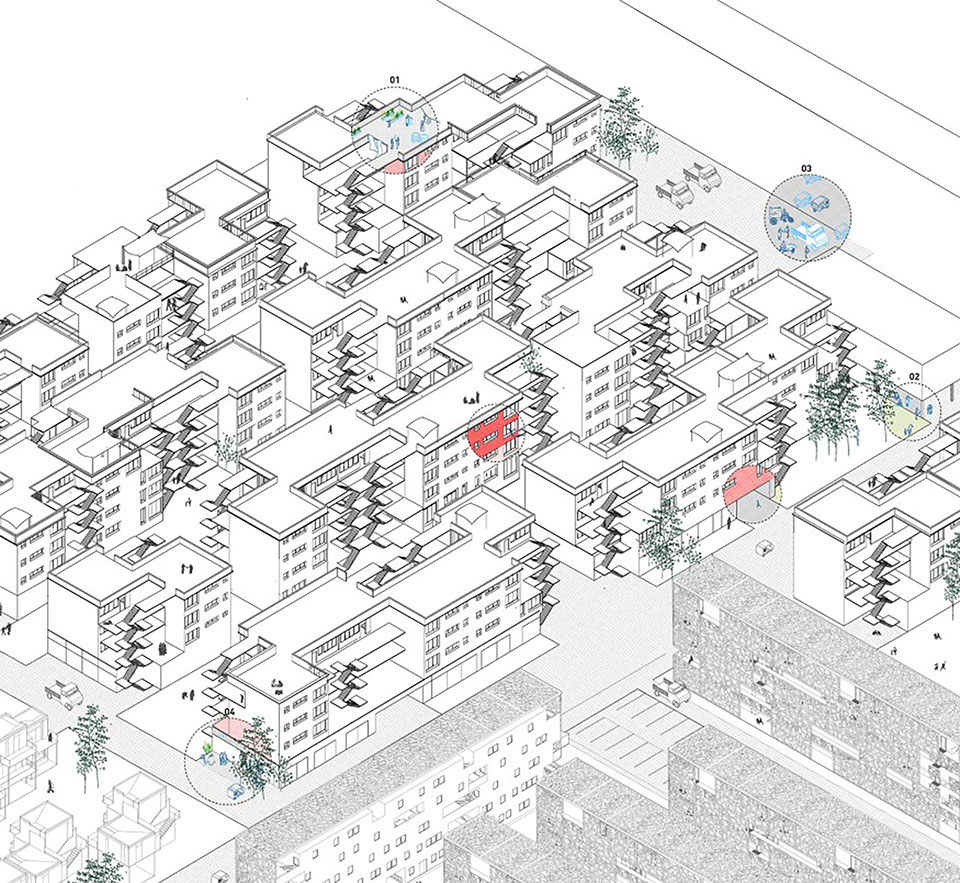 Mixed Use Social Housing for the Yamuna: Katherine Rush’s proposal rethinks high-density residential typologies in the region, proposing a user-controlled “gradient of privacy” that can change over the course of each day. An analysis of existing low-income housing in New Delhi showed that many residents of dense slums live with only 1 to 5 square meters of space per person. With stackable furniture, movable partitions, and terraces and courtyards shared by neighbors, this model provides 8 to 10 square meters per person, while giving residents more agency over their surroundings. 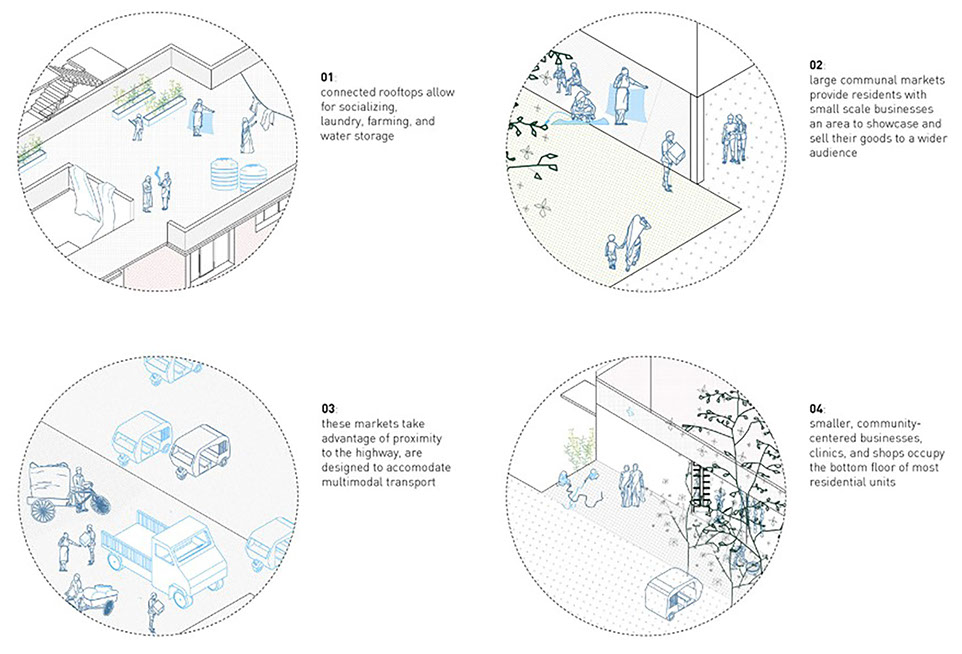 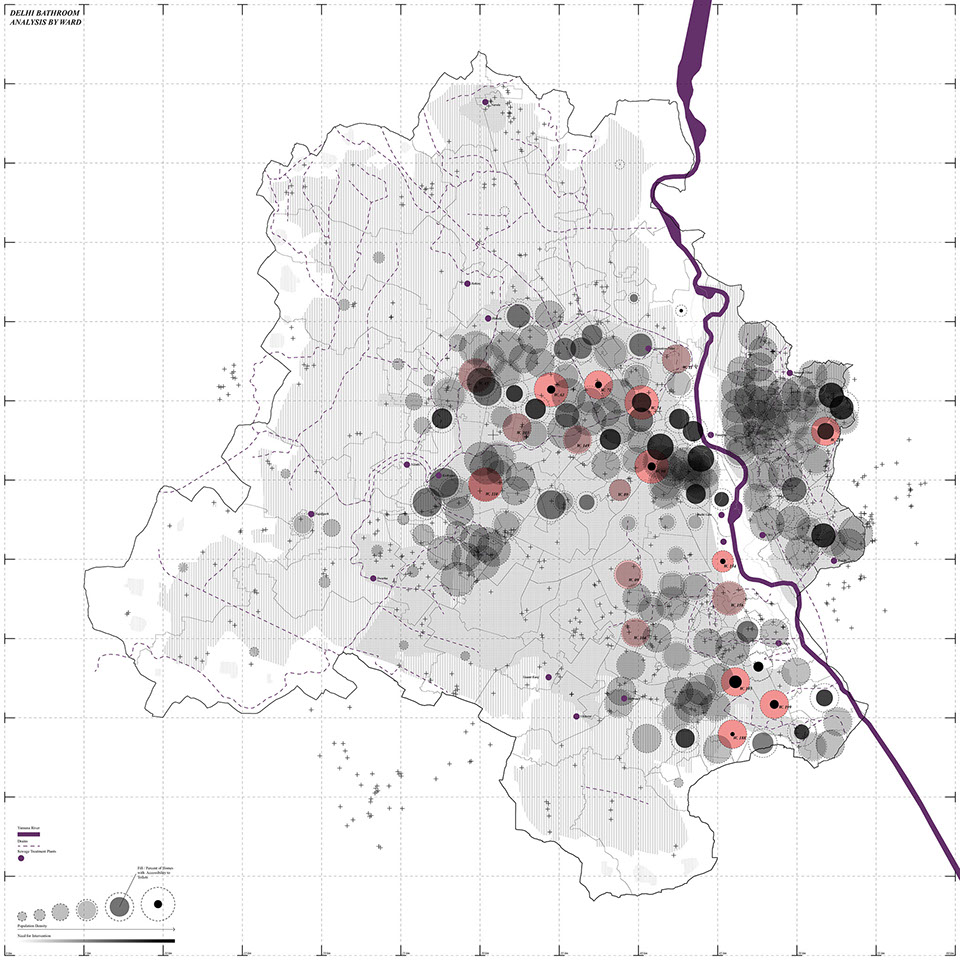 Approaching Sanitation: A Typological Response to the Study of Bathroom Infrastructure in Delhi, India: A lack of bathroom infrastructure means that one of the main contaminants of the Yamuna River is fecal matter. Darcy Engle analyzed the bathroom infrastructure in the region, comparing population density with the percentage of homes with toilet access to determine areas that most need intervention. With that information, she developed proposals ranging from rooftop facilities, to community towers that accommodate toilets and areas for bathing and laundry, to large public facilities that serve as community catalysts, incorporating retail and child care. 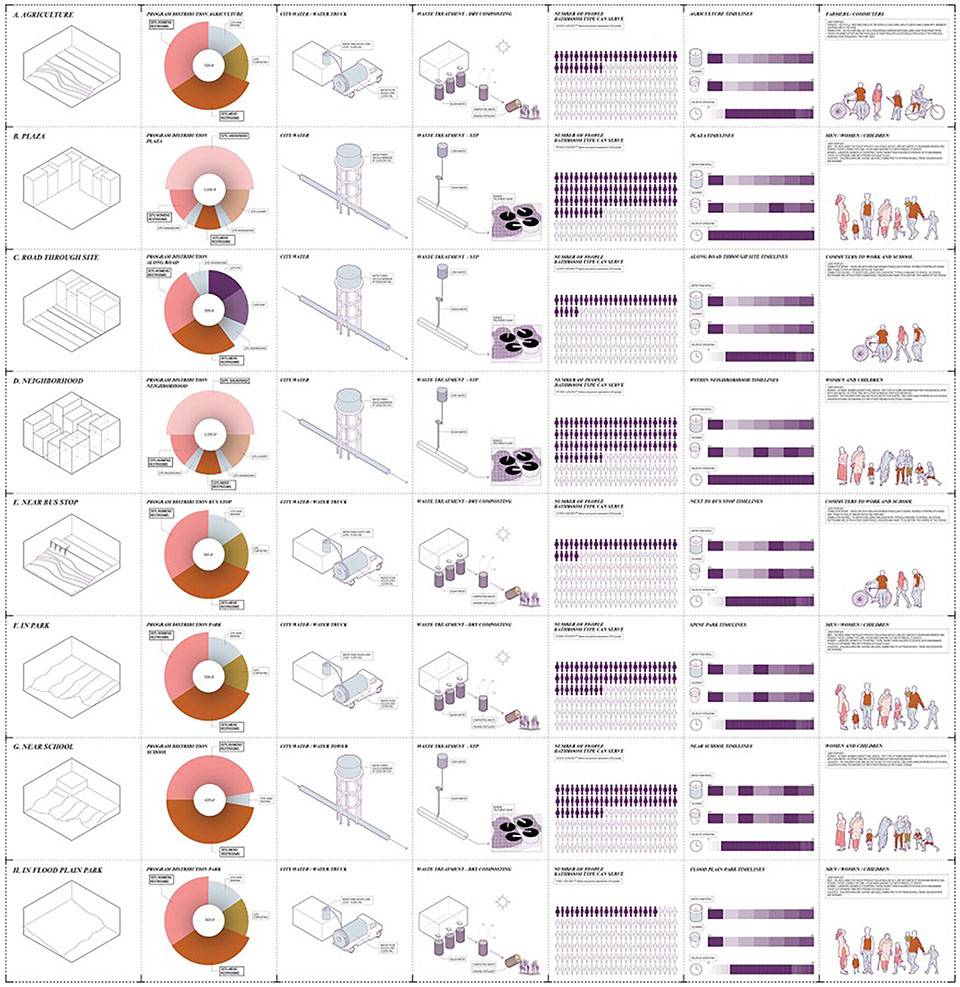 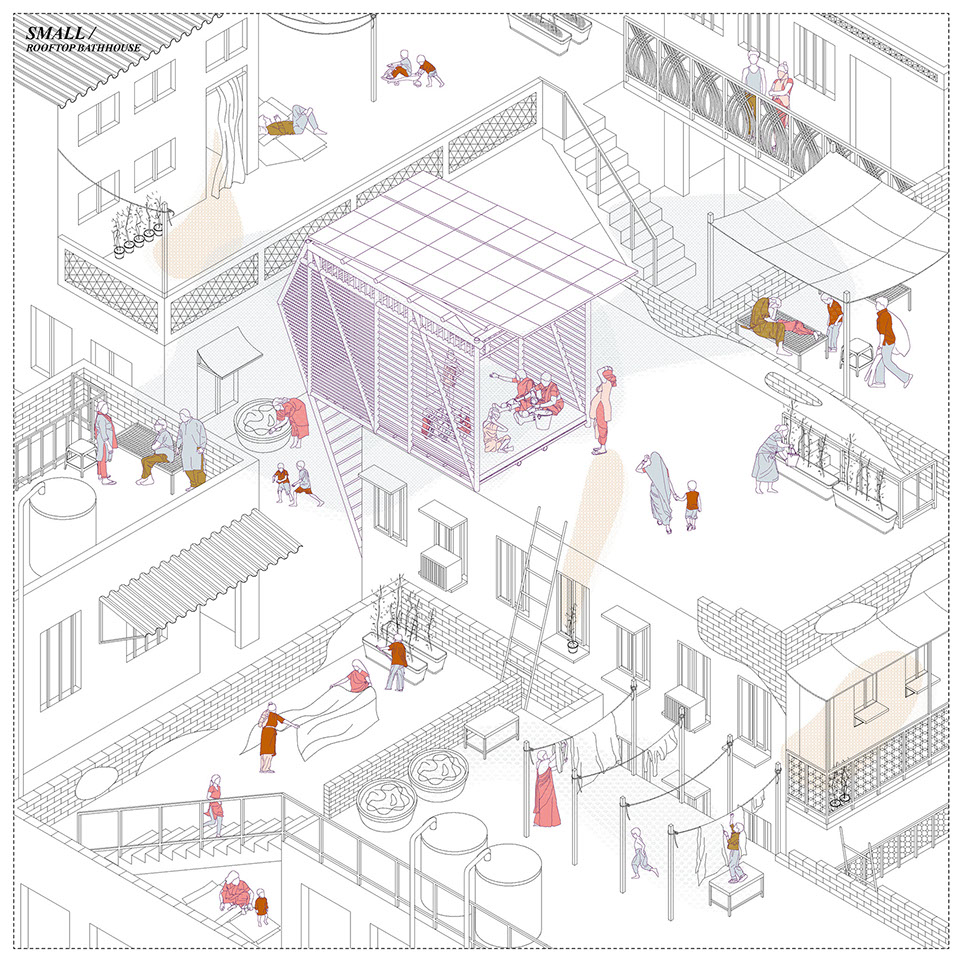 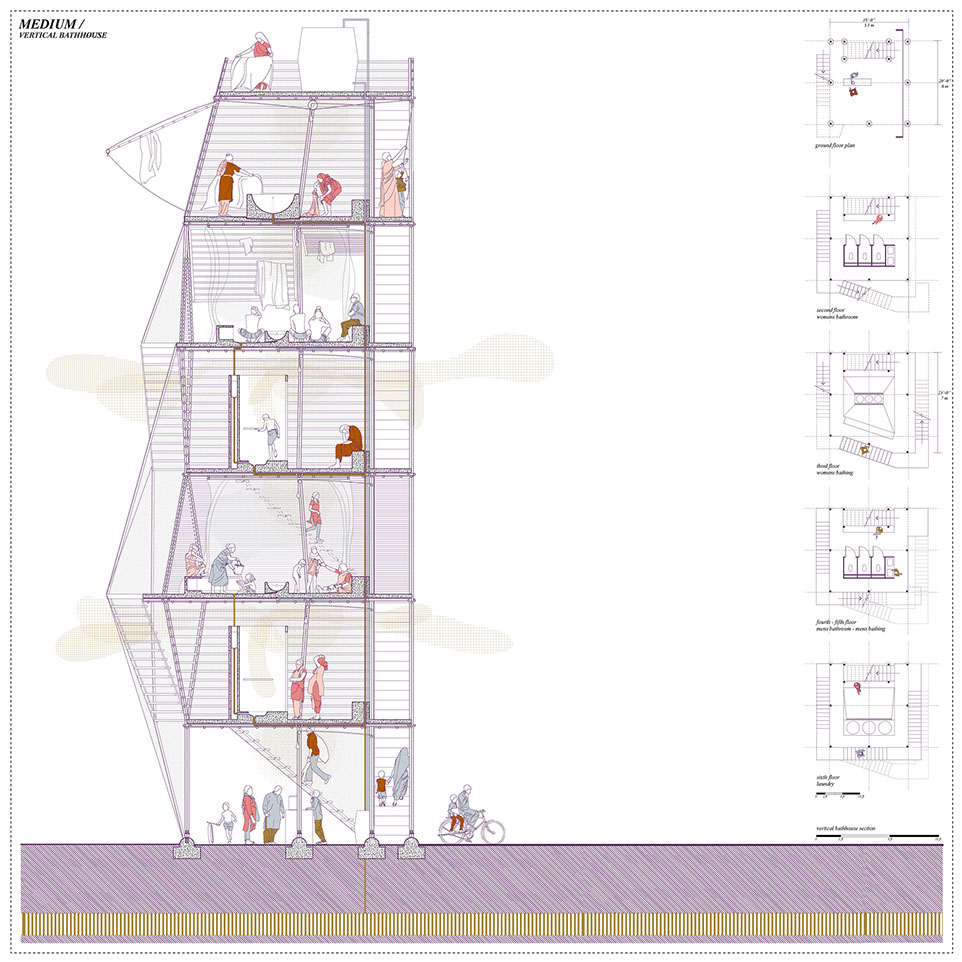